As the Crow Flies

The historians say that once a squirrel could travel from the Capital, Ottawa to the Great Lakes without once having to touch the ground. The land was that tree covered. A journey as the crow flies of over six hundred miles.

THIS OF COURSE IS NO LONGER POSSIBLE. But, the squirrels here use the cedar rail fence as a highway. Like much about our new place, it needs repair. It butts against our neighbour’s aluminum fence painted red ochere. A colour I used as a ground for all of my Lake Huron paintings.

As a ground, showing bits, it is a wonderful addition, but as a fence, there is just too much of it.

Come spring we will derail the cedar fence, it is on its last legs and plant trees and bushes instead.

I have spent most of the winter day dreaming the back garden into a haven for birds. Wild life I don’t expect to see here, too much grass, too many fences, too little nature 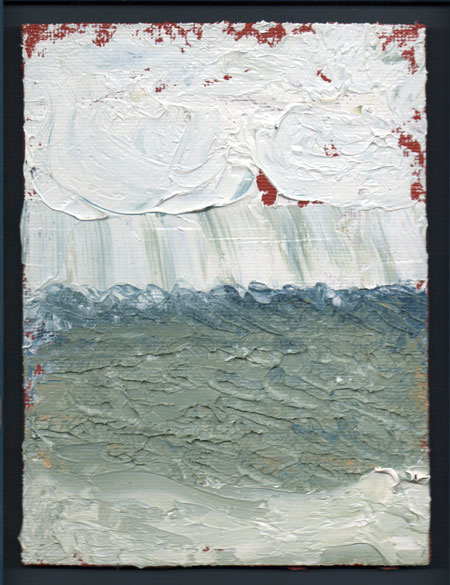 Sermons in stones, and good in everything.”

In my Grandmother’s house when the world turned over so did she. Not a dirty dish, sock, or carpet, all was swept clean for the New Year.

She had a four-inch scar on her forehead. There must have been three cars in the Swedish community of Moira, Minnesota in 1921. She was getting a ride with a neighbour to the bus station. Two of those three cars collided on a country road. There were no seat belts then, so she hit the windshield. She was on her way to Detroit, to stay with Esther, her older sister, to work in the Big Houses. She was fourteen.

Grandmother did get there eventually, and in the Big Houses (her term) the stuffing for the Christmas goose, the mistress said “had to be made with a silver fork”.

Once again, the world has turned over, in our fabricated clock. My house didn’t. But then, for me the winter solstice is the day for the world to change its face.

I dreamt of mice last night. Grandma, through the depression used to feed the ones in her house. I miss ours.

For the first time, we are putting out seed for the birds. In our old place I never needed to, we had enough to feed them, with plenty of weeds and plants growing in the gardens and fields.

That is the thing about a New Year, do we have regrets or new beginnings.